The Black Bottom neighborhood, originally named after its fertile Black topsoil, has had constantly-shifting boundaries in cultural memory, as have its neighbors in Paradise Valley. This was the result of a fallacious, racially-minded equivocation between the name “Black Bottom” and the area’s Black inhabitants.

Jiam Desjardins, who lived in the neighborhood and currently studies it himself, noted in his interview for the BBA that several historians misconstrue where the area’s boundaries were, among them the photographer Clarence Burton of the famous Burton Historical Collection: "And they went passin’ it off… I told ‘em, I said, ‘That’s not Paradise Valley.’ That’s not Black Bottom. Just because there's Black people, that’s what they have people … that’s where they have to be.”

According to historian Thomas Sugrue, the Black Bottom area was the poorest part of Detroit’s Lower East Side, “between the [Detroit] river and Gratiot Avenue, on the site of Detroit’s earliest settlements” (p. 160). North of Gratiot was Paradise Valley, with “nearly a third of Detroit’s black population … on [its] streets clustered around St. Antoine and Hastings”.

When referring to the Black Bottom area that was razed, the Archives’ exhibits operate with these boundaries in mind: Detroit River / Jefferson to Gratiot, Hastings to McDougall.

The first stage of the destruction was associated with the construction of Lafayette I in the early-mid 1950s; this destroyed the area bound by Lafayette and Gratiot, Hastings and the Railroad running through.

The second phase was the construction of Lafayette II in the late ‘50s, which added the Lafayette-Jefferson, Hastings-Railroad area.

The third phase was the demolition of I-375 in the early ‘60s, which also destroyed the Gratiot-Jefferson, St Antoine-Hastings area.

The fourth was Elmwood II’s construction in the ‘60s-‘70s, destroying the Railroad-Chene and Kercheval-Lafayette area.

The fifth, the building of Elmwood III, destroyed the Railroad-Elmwood, Lafayette-Jefferson area.

The sixth, Elmwood I in the mid-70s, destroyed the last remaining section, bound by Chene-Elmwood and Kercheval-Lafayette. 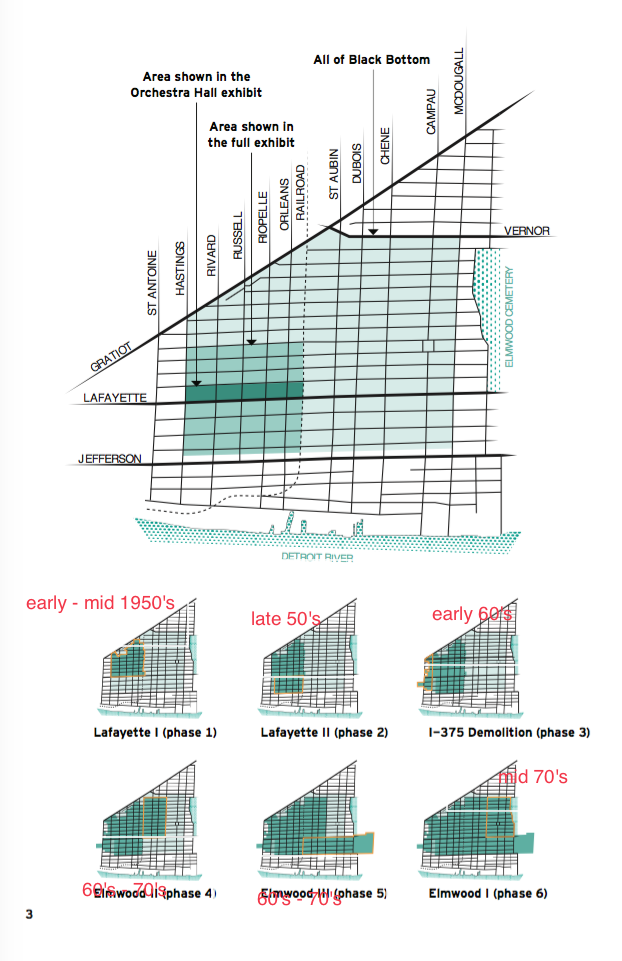 Diagram of Black Bottom and its gradual destruction, reconstructed from city documents by Emily Kutil.

North of Gratiot was Paradise Valley, where several thriving businesses and clubs were founded (Sugrue, p. 160). According to Detroit historian Ernest Borden, these included businesses on Gratiot, St. Antoine, Adams, Hastings, and Brush Streets, as well as on Vernon Highway (pp. 12-14). There were also some local businesses and bars in the Black Bottom neighborhood itself.