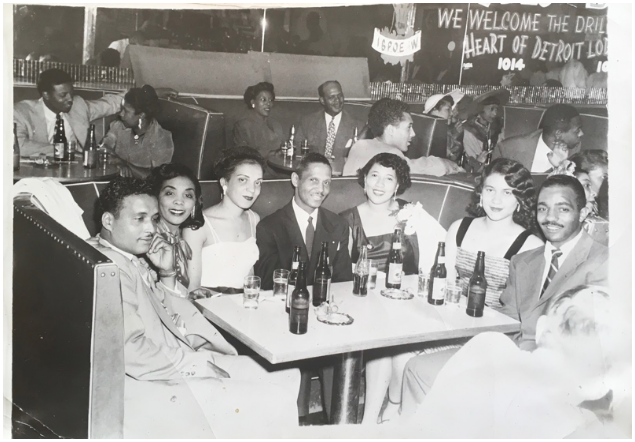 Gallerist Dell Pryor and her friends at the Flame Show Bar.

Detroit's Paradise Valley was full of nightclubs, bars and theaters frequented by Jazz & Blues musicians known locally and around the world. From the 1920s until the 1950s, Hastings Street was a hub for Black musicians to perform, rivaling other places like Harlem and the Southside of Chicago. Jazz greats like Billie Holiday, Ella Fitzgerald, Bessie Smith, Cab Calloway, Sammy Davis, Jr. and Duke Ellington were regular guests in Paradise Valley's nightclubs; playing in venues like Jake's, the Paradise Theater, the Tropicana, the Club Plantation, 666 Club, Club Harlem, El Sino Club, the Flame Show Bar, the Chocolate Bar, Sportee's Lounge & the Horseshoe Bar.

Though known nationally as a place for Black music and entertainment, Paradise Valley was also a concentrated area of Black entrepreneurship. with dozens of the clubs, speakeasies and theaters owned by Black Detroiters.

When I-375 freeway was built, this area was essentially decimated to make room for the "urban renewal" efforts of the city. Few theaters, clubs, and restaurants remain from this era. One of the last vestiges of Paradise Valley, the Horseshoe Bar at 606 Adams St, came down recently with the construction of Ford Field.